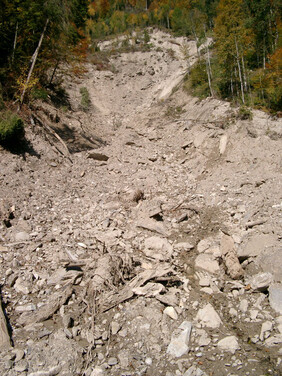 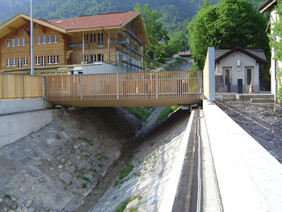 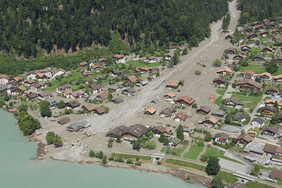 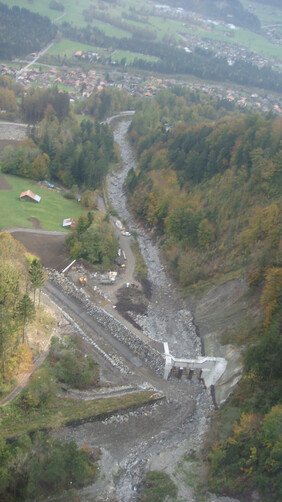 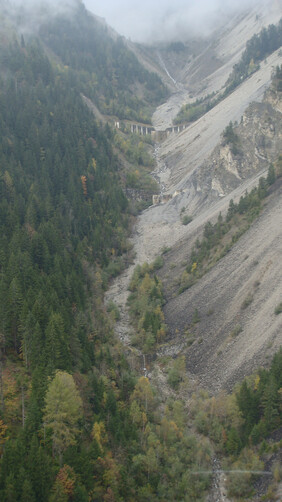 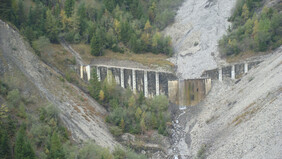 A debris flow occured in the Trachtbach torrent early on the morning of 23 August 2005. The cause was a landslide in the Ritziwald forest (image 1). Bridges in the village of Brienz were blocked and debris flow deposits accumulated as a result. The damage caused by the Trachtbach debris flow included 20 destroyedor severely damaged houses and generated around CHF 30 million in damage costs.

A metering gate was constructed in the catchment area of teh Trachtbach torrent as the centerpiece of a hazard protection project. Two new bridges were built in the village, one of which is movable (image 2). The runoff capacity of the channel was increased and a low water crossing installed.

23 August 2005: four hours after the event in the Trachtbach stream, a debris flow occured in the Glyssibach torrent (image 3). In this case also, a landslide in the catchment area of the torrent was partly responsible for the generation of large volumes of debris-flow material. Approximately 70,000 m3 debris was transported into a populated area in the course of the event. Two people were killed and 28 houses were destroyed completely or in part.

A diverson structure (image 4), the only one of its kind in the world, was constructed along with a dam. In the event of a major debris flow. most of the transported material is deposited in the depositional area. A small debris flow should be able to pass through the barrier without leaving the usual stream bed.

The check dams in the channel of the Lammbach are around 100 years old (image 6). They were constructed from natural stone masonry between 1896 and 1912. Some barriers were increased in height retrospectively or upgraded through concrete reinforcement and back anchoring.

A lot of wood was logged in the catchment area of the Lammbach torrent in the Middle Ages and the stability of the slopes was impaired as a result. Simultaneous to the implementation of structural protective measures, afforestation measures have also been under way there for 100 years.