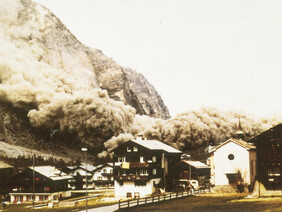 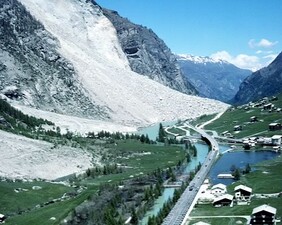 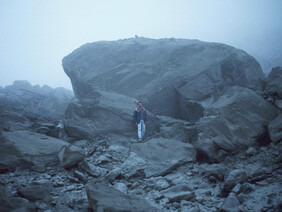 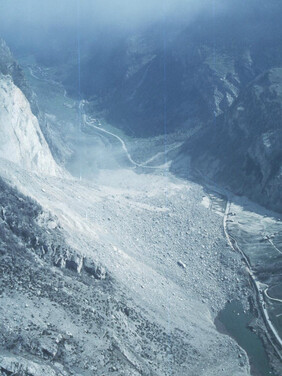 On 18 April 1991, around 15 million m3 of rock slid down to the valley near the town of Randa which is located in the Matter Valley. The rocks were the size of houses and the drop height was 600 metres.

The main cause of the rockslide was the effect of frost and thaw periods and increased water pressure in teh rock fissures.

Three days after the first rockslide, a secondary rockslide comprising around 100,000 m3 of rock occurred. Thanks to the raising of the alarm 30 minutes before the event, it was possible to evacuate the hazard area.

Another landslide comprising a few million cubic metres of rock material occurred in Randa on 9 May of the same year. A total of 33 million m3 of rock fell to the valley in all of teh rockslides. On this occasion, not only the railway line but also the road was buried. Another major problem arose with the river Vispa which could no longer flow through the rock debris as a 1.3 km-long stretch of the river was blocked.

The Swiss army constructed a bypass road and a temporary floating bridge over the lake which could be opened to traffic four weeks later. The new track for teh railway was completed the weeks later.

The Problem posed by the dammed water could not be resolved so quickly. It was attempted to keep the water level in the lake low using existing hydropower plants and additional pumping stations, however the flooding of the lake remained a constant threat. A solution was eventually found by cutting a 20-metre-deep channel through the rock debris. Despite this, however, it was not possible to avoid flooding in parts of the village during storms in July and August. 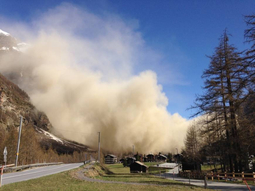