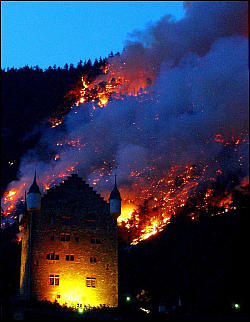 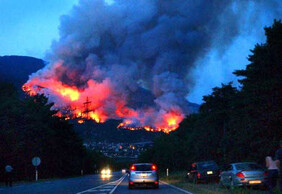 Over 300 ha of forest was burned to the ground in one of Switzerland's largest documented forest fires which occured above Leuk in the canton of Valais in August 2003. The fire started on the evening of 13 August 2003. The area affected by the fire ranged from around 800 m asl above Leuk Castle to the tree line at 2,100 m asl. Approximately 300 people had to be evacuated from the area. Over one fifth of the almost completely eradicated forest acted as a protective forest for Leuk and the road to Leukerbad.

Thanks to the intervention of the emergency forces, the situation was brought under control on 15.03.2003. In addition to the fire service, mebers of the Civil Defence and army were also deployed. Private and army helicopters provided support in extinguishing the fire form the air. Smouldering fires, which were also located underground, lasted for days.

In addition to over 300 ha, a holiday house, two vineyards and wild animals were destroyed and killed by the fire.