Lake-emptying at the Lower Grindelwald Glacier (2008) 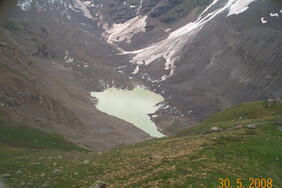 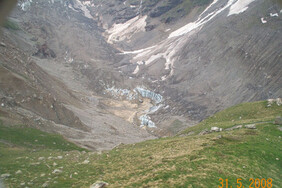 Despite strong inflows, the water level in the glacier lake did not rise in the course of the morning. The river Lütschine became increasingly yellow in colour over the course of the day. The maximum lake volume on the day reached 800,000 m3. Between 5 and 8 pm, a volume of around 570,000 m3 of water emptied out of the lake.

The channel capacity of the Lütschine was almost completely exhausted along extensive stretches of the river. Large-scale overbank flooding occurred in the Grindelwald area and caused agricultural damage. If the emptying of the lake had coincided with a thunderstorm, a lot more damage would have arisen. Moreover, the measures implemented in the aftermath of the thunderstorm of 2005 worked. Thanks to the installation of a probe in the glacier lake and the measurement of the water level in the glacier crevice, the alarm could be raised in good time in the affected settlement areas.

One of the measures implemented after the event of 2008 was the construction of a tunnel (January 2009 to spring 2010). The tunnel, which is a good two kilometres in length and runs between the glacier lake and the glacier gorge, functions as an overflow and drains the lake if its volume exceeds 500'000 m3. As far as the regions along the Lütschine are concerned, this means that no further damage may be expected in the event of a breakout.