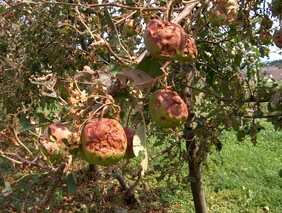 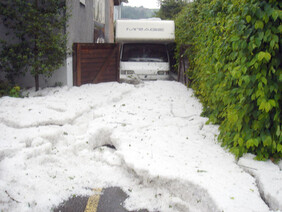 Hail is solid precipitation in the form of balls or lumps of ice with a diameter in excess of 5 mm. The form and size of the hail stones and the intensity of their effects are influenced by climate, topography and wind conditions.

The Central Plateau and west Switzerland were affected by heavy thunderstorms on 5 July 1999. The storms caused extensive damage to buildings, vehicles and agricultural crops . The hail was strongest in the regions west of Bern and in the bordering areas of the canton of Fribourg. The cost of the damage caused in the canton of Bern an Fribourg totalled tens of millions of Swiss francs. Over 2,000 houses in Fribourg were damaged by the hail stones and several sheep were killed in the hamlet of Bärfischenhaus near Mühleberg Bern.

The largest hail stones were 75 mm in diameter and weighed 280 grams.

Part 1 of the video shows the hail storm near Bösingen.

Part 2 shows some images of the damage caused.