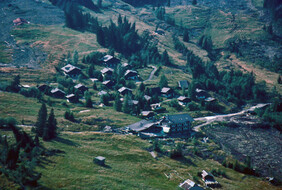 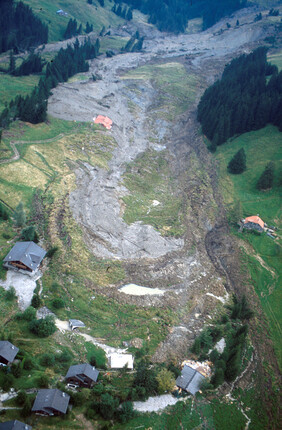 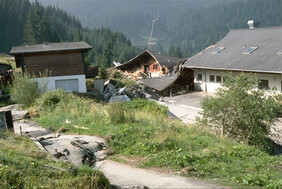 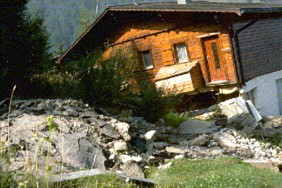 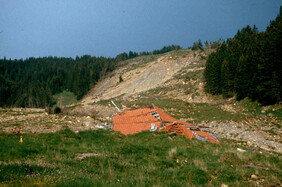 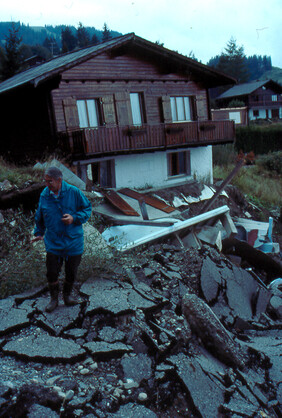 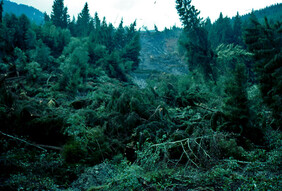 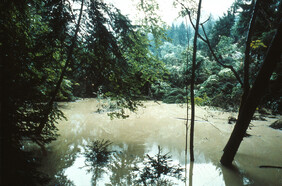 An old active slide slope in the Freiburg Pre-Alps accelerated unexpectedly in winter 1994. The Falli Hölli holiday house development in the commune of Plasselb and the surrounding Alpine huts were completely destroyed by the landslide. They slid sporadically at a rate of six metres per day in the direction of Höllbach stream. The cost of the damage to the approximately 30 buildings exceeded CHF 15 million.

An extensive release area was located on the ridge of Mount Schwyberg at an altitude of between 1560 and 1645 m asl. A large quaternary mass above Chlöwena, Falli Hölli and Lantera moved initially as a rotational landslide and later, at the lower part, as a translational landslide. The main front of the slide mass flowed into the Höllbach stream at an altitude of around 1,000 m asl and a small lake was formed following the creation of a dam. Large sections of the population were aware of the possible dam-breach scenario with the resulting flood peak in the Höllbach and in river Ärgera.

The Falli Hölli landslide, which was reactivated in 1994, represents a major and far-reaching event in the context of the Swiss Pre-Alps: the body of the landslide was 2 kilometres in length, at its widest point it measured up to 700 metres and it reached a depth of 70 metres. The sliding surface was around 1.5 km2 in length and the volume of material consisted of quaternary deposits: moraine, debris and mud flow deposits, both old and recent slide and rockfall material. It mainly comprised deposits from earlier mass movements.

The Falli Hölli holiday house development, which was barely 25 years old, slid 200 metres down towards the valley on a huge mass of loose rock. Nobody suspected anything of the impending disaster in the winter. In spring 1994, damaged drinking-water pipes were repaired several times. On 1 May a neighbour noticed that Chalet Guthauser at the upper edge of the development was leaning. A crisis committee was formed in May under the Chairmanship of the Oberamtmann (prefect) M. Zosso and including the Mayor of Plasselb, representatives of various authorities, specially commissioned experts, the buildings insurance company and a geological institute. For safety reasons, the crisis committee had to prohibit residents initially form spending the night in the houses, then from going there during the day and, eventually, from entering the area at any time. The police and military were deployed to monitor the area. After a few months, the landslide slowed down. The cantonal insurance company compensated all of the property owners to their satisfaction by 1996.