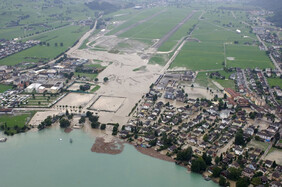 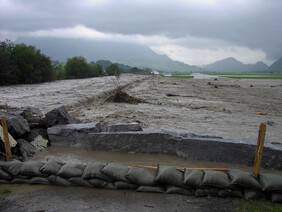 The intensive precipitation in summer 2005 transformed both the river Engelberger Aa and nearby streams into raging torrents that transported large volumes of bedload, debris and wood into the valley and burst their banks in places. Because the implementation of flood protection project measures had not been completed, the water from the Aa flooded into the low-lying settlement area of Ennetbürgen.

The canton of Nidwalden adopted the concept of differentiated flood protection for its flood protection project on the river Engelberger Aa. Based on this concept, flooding is not prevented at any cost. Instead, the focus is on the protection of valuable structures and properties. Hence, in August 2005, the Engelberger Aa was allowed to flood in a controlled way at two points on the plain between Ennetbürgen and Buochs. It was possible to prevent extensive damage in more vulnerable locations in this way.